Explore SIFF’s illustrious history as one of the premiere Bay Area Festivals. Past articles, coverage and official releases can be found here. Our Media Accreditation application for our milestone 25th Anniversary film festival can be found below.

SIFF Summerfest Back by Popular Demand 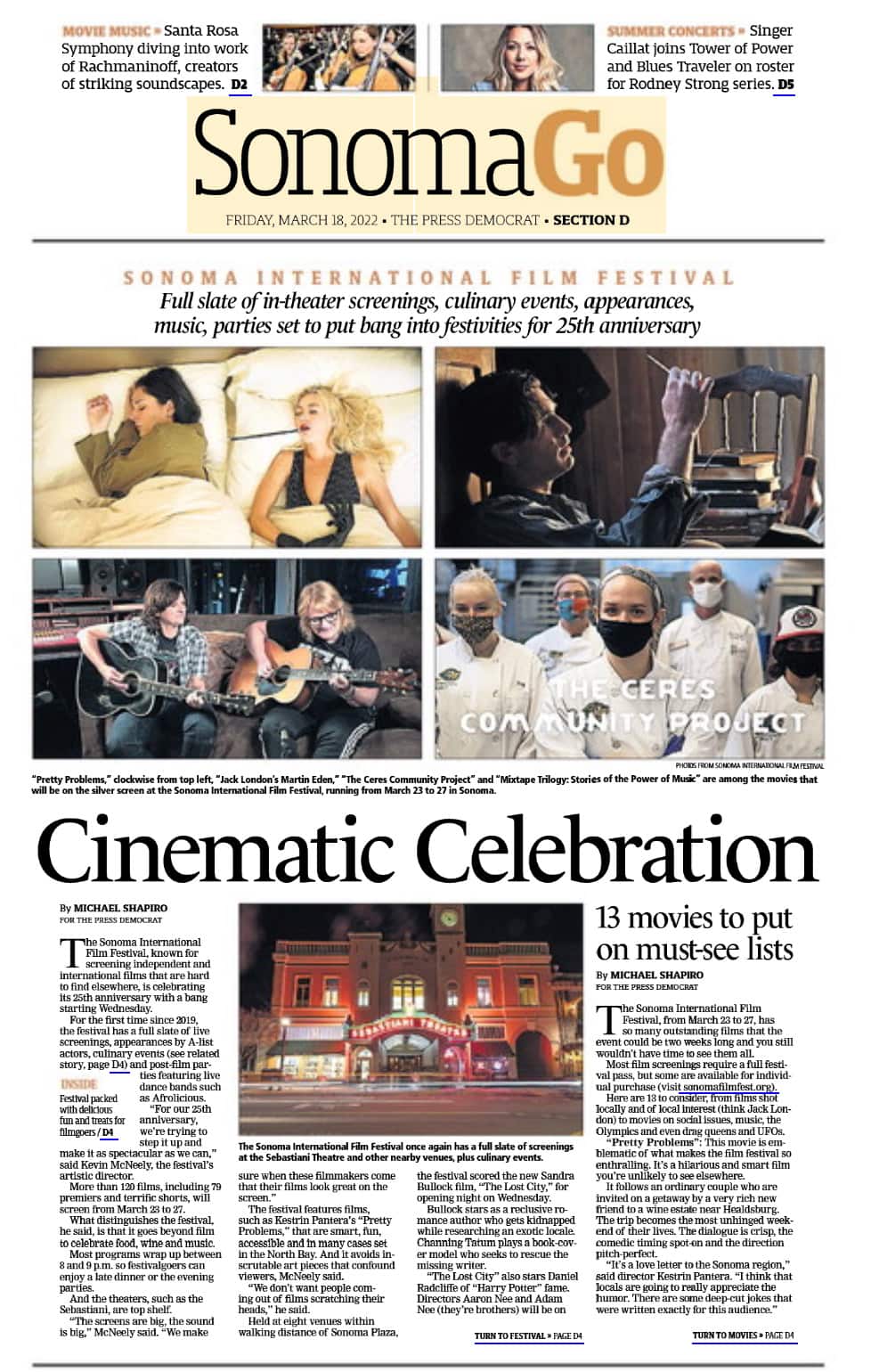 The first two festivals were produced with sponsorship from Sonoma's Sister Cities Program and were held in the early fall. Film industry luminaries, and Bay Area residents, Danny Glover, Francis Ford Coppola and John Lasseter were among the first to attend and support SIFF’s mission to bring new independent world cinema to Sonoma.

SIFF’s festival moved to the spring and included a tribute to John Lasseter with a screening of his early animated works.

The festival highlighted restored film classics, with a special tribute to Richard May, noted film historian and preservationist.

This year marked the debut of food and wine-tastings at all screening venues. The program doubled in scope to a total of 50 films, and included industry panels, as well as the inception of the Media Arts Program at Sonoma Valley High School to provide students the opportunity to learn about and create films. The festival showcase included a screening of FINDER'S FEE and honored three of the films creators: Robert Forster, Lifetime Achievement; Matthew Lillard, Breakthrough Actor; and Jeff Probst, Breakthrough Director.

World Cinema selections were added to the festival, with six feature films from six different countries highlighted, including Oscar-nominated THE MAN WITHOUT A PAST from Finland. Oscar-winning Director John Lasseter hosted the first Imagery Honors, a talk-show style tribute to three outstanding writer-directors--Alexander Payne, Mark Romanek and Agnieszka Holland.

The festival program grew to over 70 films, including 20 student shorts and 10 animated shorts, which were screened within our well-received special shorts programs. Women in film was a significant theme, and the festival honored Blythe Danner with a special Achievement Award, as well as three actresses spanning three generations at the Imagery Honors Tribute Evening--Jena Malone, Deborah Unger and Fionnula Flanagan.

Bruce Willis was presented with SIFF's Lifetime Achievement Award with a screening montage of his body or work and a Q&A with the actor. His Tribute Gala followed at Jacuzzi Winery. The Opening Night Film was THE ANSWER MAN directed by John Hindman and starring Jeff Daniels, and the Closing Night Film was NECESSITIES OF LIFE directed by Benoit Pilon. Industry Media participants included People Magazine and Entertainment Tonight

The SIFF Backlot Tent, located in Sonoma Plaza, was introduced and served as the hub for the SIFF Box Office, festivalgoers, filmmakers and sponsors. Noted actor Lauren Hutton was presented an Achievement Award by renowned actor/comedian, and festival friend, Robin Williams. Hutton, along with David Duchonvy, attended the festival in support of their film THE JONESES, which closed the festival.

Actor/activist Susan Sarandon received our Lifetime Achievement Award after a Q&A to a sold out audience. Her special dinner, attended by several SIFF patrons, was held at Sebastiani Winery featuring the band, Crossfire.

SIFF focused on Latino films and festival goers with a new program, Vamos al Cine. Also that year director John Waters performed his one-man show to a standing room only crowd. The Opening Night Film was Luc Besson's LADY, the epic story of Aung Suu Kyi who was eventually elected to Parliament in Myanmar. Christopher Lloyd, whose outstanding performances in ONE FLEW OVER THE CUCKOO'S NEST, BACK TO THE FUTURE, and the TV show Taxi, received SIFF's Award Of Excellence after the screening of his film LAST CALL.

SIFF again welcomed actor Demián Bichir, this time with actor Jude Law, for our Opening Night Film DOM HEMINGWAY. Historically based character film BELLE was featured as the Closing Night Film. Another festival highlight was the screening of BORN IN CHICAGO followed by a live concert with some of the film’s featured musicians including Nick Gravenitas, Barry Goldberg, Harvey Mandel, Rick Reed and Gary Malleber, among others.

We honored two of Hollywood’s most influential and contributing filmmakers. Robert Kamen, scriptwriter and Sonoma winegrower, whose box office hits include KARATE KID, THE 5TH ELEMENT, TRANSPORTER and TAKEN; and Meg Ryan, actress/director, who brought her film ITHACA and whose acting credits include SLEEPLESS IN SEATTLE, WHEN HARRY MET SALLY and YOU’VE GOT MAIL, among others. Our 19th festival opened with LOUDER THAN BOMBS (Norway | France | Denmark) and closed with THE SENSE OF WONDER (France). The SIFF Backlot Tent, featuring a VIP Lounge, daily Happy Hours and main stage entertainment nightly, and the Le Tigre Tent, a daytime screening venue and nighttime vaudeville and burlesque stage, electrified the expanded SIFF Village. Five days, 106 films, 200 filmmakers from 16 countries, 5,000 festival attendees, and a showcase of Sonoma’s best wines, spirits and cuisine.

SIFF reached its landmark 20-year anniversary as a cultural gem in Sonoma Valley and beyond. We screened a record number of films (135) at seven venues and hosted over 200 filmmakers from around the world. The Taiwan Tourism Bureau sponsored the Sonoma Community Center screening venue and served food and drinks representative of their country. SIFF’s Friday Night Party in the Backlot Lot Tent--Taiwanese Night Market—made for rave reviews. Returning sponsor, Celebrity Cruises, created a popup mobile theatre with 91 seats, digital projection and served truffle popcorn to festivalgoers. VIP Lounge for select passholders at the SIFF Backlot Tent featured the best in food, wine and fun with Tito’s Vodka, Nespresso coffee service, Makers Mark, and culinary delights from Sonoma’s best caterers, restaurants and markets. Front and center in the SIFF Backlot Tent were more than 50 premium local wineries with tastings available from 11 AM to closing each day.

This year, we dedicated our festival to Sonoma Firefighters and First Responders as we sought to rebuild our Sonoma and North Bay communities from the devastating wildfires of October 2017. The exclusive SIFF | Devour! Chefs & Shorts special culinary event, produced by Michael Howell and Lia Rinaldo in partnership with SIFF, made its debut. This instant hit brought together five renowned chefs, inspired by short food-focused films, who each prepared a course accompanied by a topflight wine and their assigned short film. Another new event introduced during our 21st festival was the SIFF Plaza Stroll, which gave our passholders access to seven select Sonoma restaurants, and tasting rooms for drink and food specials created especially for them.

The festival opened with the Australian film LADIES IN BLACK with Julia Ormond and Rachael Taylor, the stars of the film in attendance. The SIFF Backlot Tent featured our Friday and Saturday evening parties, VIP Lounge, a Sony Home Theatre interactive experience, and the new SIFF Café open to the public. The SIFF | Devour! Chefs & Shorts culinary event was a sellout on Thursday evening and Chef Tyler Florence hosted a sold out Friday evening dinner to screen his film UNCRUSHABLE. The UFO Symposium panel and screening special continued to be a popular draw among local enthusiasts.

SIFF2020 was shaping up to be our best fest yet, but with less than three weeks before it was to begin, the pandemic hit. Slated were more than 120 films from over 30 countries, appearances by acclaimed directors Lasse Hallstrom and Agusti Villaronga, and actors Karen Allen, Kate Bosworth, Christanne de Bruijn, Louis Gossett Jr, Robert Kennedy Jr, Lena Olin, Edward James Olmos, David Strathairn, and D.B. Sweeney. Two new events—the SIFF | Screen & Cuisine Lunch event featuring FANTASTIC FUNGI and our SIFF Sip Trips, featuring complimentary tastings and transportation to select festival wine sponsors, were also created to delight festivalgoers. The festival was set to end with the US Premiere of SUZI Q and a live concert from 70s rock icon Suzi Quatro and the Runaways’ Cherie Currie.

And in light of the unprecedented global situation, and in the spirit that is #sonomawoodstrong, we quickly pivoted and launched SIFF 2.0, our first virtual online film festival, which featured 100+ films from 20 countries, and reached an international audience which consumed the equivalent of 4,000 hours of media in just four days.

We use cookies on our website to give you the most relevant experience by remembering your preferences and repeat visits. By clicking “Accept All”, you consent to the use of ALL the cookies. However, you may visit "Cookie Settings" to provide a controlled consent.
Customize SettingsAccept All
Manage consent

This website uses cookies to improve your experience while you navigate through the website. Out of these, the cookies that are categorized as necessary are stored on your browser as they are essential for the working of basic functionalities of the website. We also use third-party cookies that help us analyze and understand how you use this website. These cookies will be stored in your browser only with your consent. You also have the option to opt-out of these cookies. But opting out of some of these cookies may affect your browsing experience.
Necessary Always Enabled
Necessary cookies are absolutely essential for the website to function properly. These cookies ensure basic functionalities and security features of the website, anonymously.
Functional
Functional cookies help to perform certain functionalities like sharing the content of the website on social media platforms, collect feedbacks, and other third-party features.
Performance
Performance cookies are used to understand and analyze the key performance indexes of the website which helps in delivering a better user experience for the visitors.
Analytics
Analytical cookies are used to understand how visitors interact with the website. These cookies help provide information on metrics the number of visitors, bounce rate, traffic source, etc.
Advertisement
Advertisement cookies are used to provide visitors with relevant ads and marketing campaigns. These cookies track visitors across websites and collect information to provide customized ads.
Others
Other uncategorized cookies are those that are being analyzed and have not been classified into a category as yet.
SAVE & ACCEPT